TORONTO, CANADA, May 25, 2022 – McFarlane Lake Mining Limited (“McFarlane Lake” or the “Company”) (NEO: MLM), a Canadian mineral exploration and development company, is pleased to report additional results of its exploration program at the West Hawk Lake property in Manitoba, near the Ontario-Manitoba Border. Previous results were reported on April 21, 2022. This news release and a technical report prepared in accordance with National Instrument 43-101 Standards of Disclosure for Mineral Projects (“NI 43-101”) with respect to the West Hawk Lake and High Lake properties, are available under the Company’s profile on SEDAR at www.SEDAR.com and on the Company’s website at https://mcfarlanelakemining.com/.

The completion of McFarlane Lake’s 3,000m drill program (the “Drill Program”) has confirmed the existence of high-grade gold mineralization (MLWH-22-08) 100 meters below historical gold mineralization at the Waverly Raise Zone (the “Waverly Zone”). Additionally, the Drill Program: (i) developed the potential at the Waverly Zone for a gold zone with a mineralized strike length of 200m and down to over 200m remaining open at depth; (ii) successfully intersected gold at the Sunbeam Breccia (MLWH-22-05) (“Sunbeam”) below known gold mineralization; and (iii) identified strong geological structures extending beyond the previously explored areas.

“We achieved what we had set out to do with the Drill Program,” said Mark Trevisiol, CEO of McFarlane Lake, adding, “expanding gold mineralization at depth at Sunbeam and at depth and along strike at the Waverly Zone are highlights of the Drill Program. We’ve established continuity in gold mineralization which should bode well for future drilling and with McFarlane Lake’s goal of developing compliant gold resources at West Hawk Lake while continuing to explore at depth and along the strike.”

The Drill Program was initiated in January 2022 to confirm past reported gold mineralization and to follow up on geophysical targets. Assay results from all fifteen holes have been received (including one abandoned hole). The Drill Program successfully established prospective trends in the Waverly Zone, Letain C and Sunbeam, as shown in Figure 1.

Drilling has continued to intersect zones of sheared and altered quartz monzonite with local sections of quartz veining mineralized with fine pyrite, arsenopyrite and locally minor chalcopyrite and sphalerite. Increasing widths of the shear structure were noted in drill holes MLWH-22-12, with anomalous gold values occurring over a 10m core interval, indicating a widening of the favourable structure to the East. This area will have to be further tested to determine if additional mineralized shoots are present in this area. 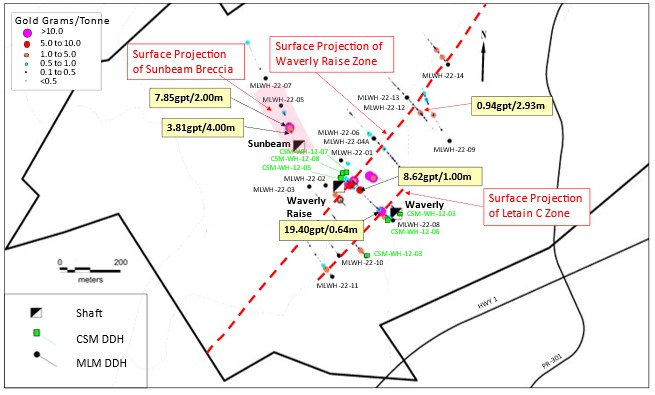 MLWH-22-08 successfully intersected the Waverly Zone at a vertical depth of 217m, approximately 100m below previous drill intercepts (Figure 2). Based on historical drilling and drilling by McFarlane Lake, the Waverly Zone has now been defined over a strike length of 200m and to a depth in excess of 200m (Figure 3). The Waverly Zone remains open for expansion to depth and for the discovery of additional mineralized shoots along the projection of the favourable structure. 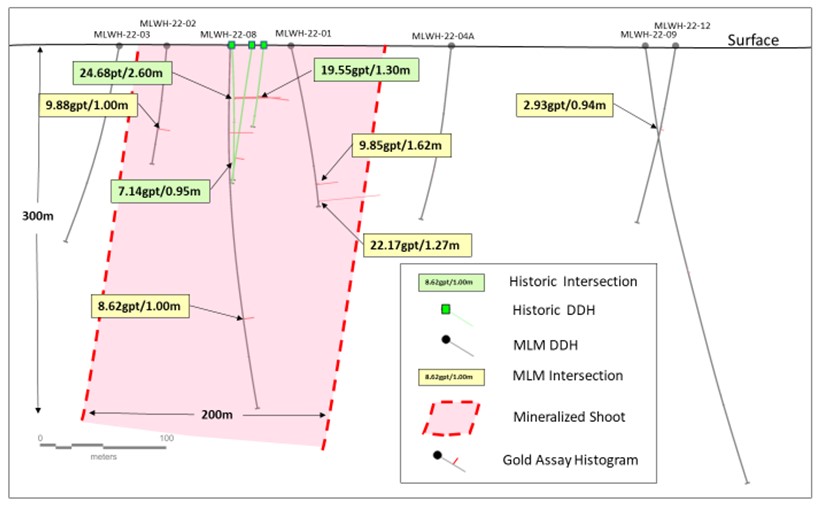 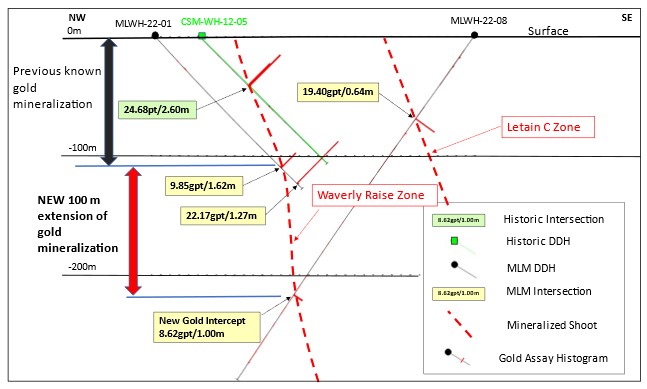 Testing of the depth extension of Sunbeam with hole MLWH-22-05 has confirmed the continuation of the mineralization below the previous mine working on the 425 foot level at the Sunbeam mine. Brecciated and altered quartz monzonite was intersected from 99.4 to 127.81 metres with anomalous gold values reported for much of the interval, with the two better intervals reported below. This shallow plunging, elliptical pipe structure has been outlined on surface (Figure 4) and developed on four underground levels and remains open for expansion at depth. 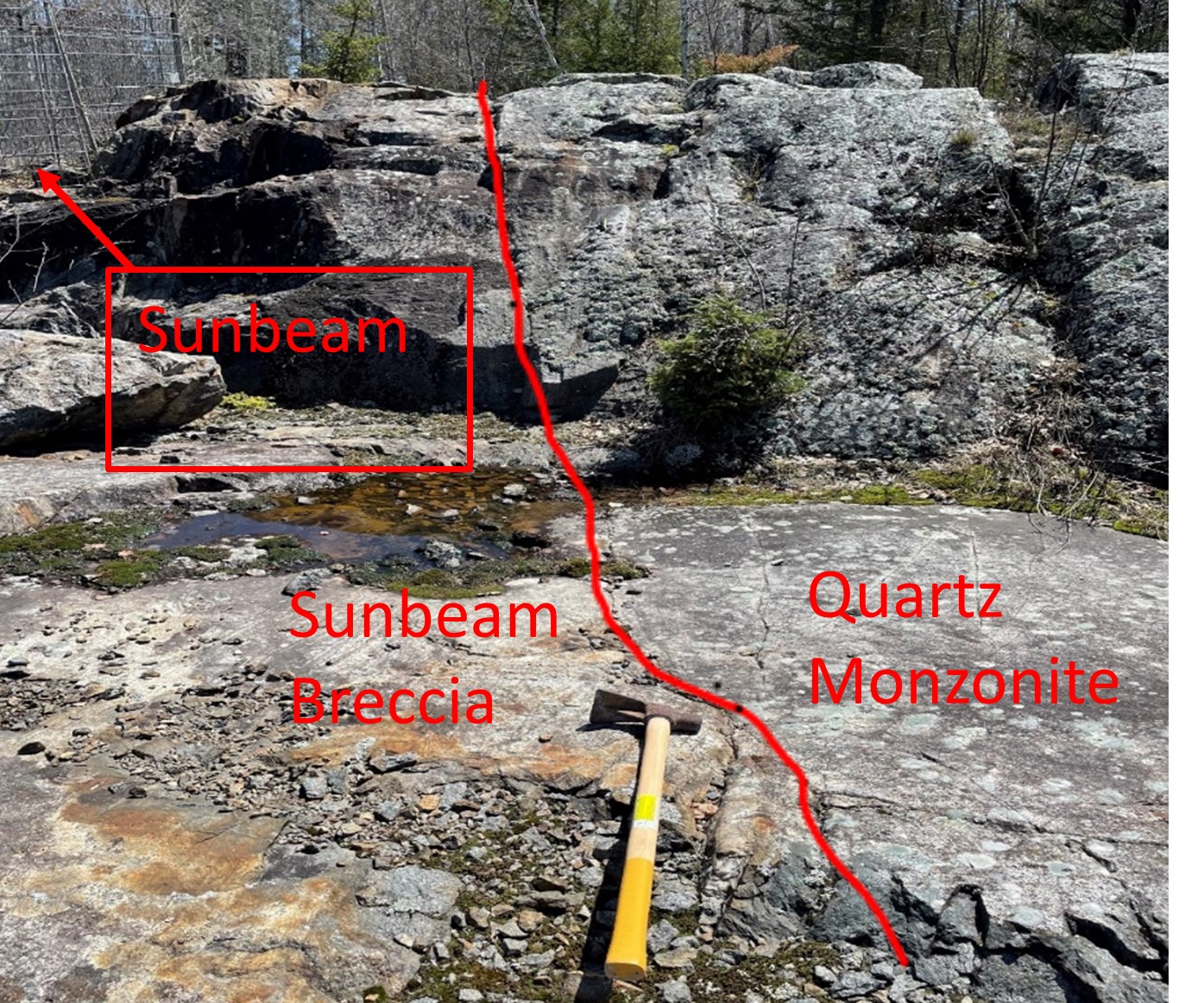 The results of these nine drill holes complete the reporting for the Drill Program.

McFarlane Lake has implemented a Quality Assurance/ Quality Control (QA/QC) program consistent with industry best practices. The drill core is being logged and sampled at a nearby facility with sawn half-core samples, including QA/QC samples, being sent to an accredited lab (Actlabs) in Thunder Bay, Ontario, for processing. The remaining half core has been retained in a locked facility for future examination. Certified reference material (CRM) standards and blanks are inserted every 10 samples into the sample stream. Gold was analyzed by a 30-gram fire assay with AA-finish. Samples above 5 grams per tonne were re-assayed for gold with a gravimetric finish, while those above 10 grams per tonne were re-assayed utilizing the pulp metallic method.

Additional information on McFarlane Lake can be found by reviewing its profile on SEDAR at www.SEDAR.com.

This news release contains “forward-looking information” and “forward-looking statements” (collectively, “forward-looking statements”) within the meaning of the applicable Canadian securities legislation. All statements, other than statements of historical fact, are forward-looking statements and are based on expectations, estimates and projections as at the date of this news release, including without limitation; anticipated results of geophysical surveys or drilling programs, estimated timing, potential mineralization, geological interpretations and potential mineral recovery processes. Any statement that involves discussions with respect to predictions, expectations, beliefs, plans, projections, objectives, assumptions, future events or performance (often but not always using phrases such as “expects”, or “does not expect”, “is expected”, “anticipates” or “does not anticipate”, “plans”, “budget”, “scheduled”, “forecasts”, “estimates”, “believes” or “intends” or variations of such words and phrases or stating that certain actions, events or results “may” or “could”, “would”, “might” or “will” be taken to occur or be achieved) are not statements of historical fact and may be forward-looking statements.

McFarlane Lake’s operations could be significantly adversely affected by the effects of a widespread global outbreak of a contagious disease, including the recent outbreak of illness caused by COVID-19. It is not possible to accurately predict the impact COVID-19 will have on operations and the ability of others to meet their obligations, including uncertainties relating to the ultimate geographic spread of the virus, the severity of the disease, the duration of the outbreak, and the length of travel and quarantine restrictions imposed by governments of affected countries. In addition, a significant outbreak of contagious diseases in the human population could result in a widespread health crisis that could adversely affect the economies and financial markets of many countries, resulting in an economic downturn that could further affect operations and the ability to finance its operations.

For further information regarding this press release, please contact: